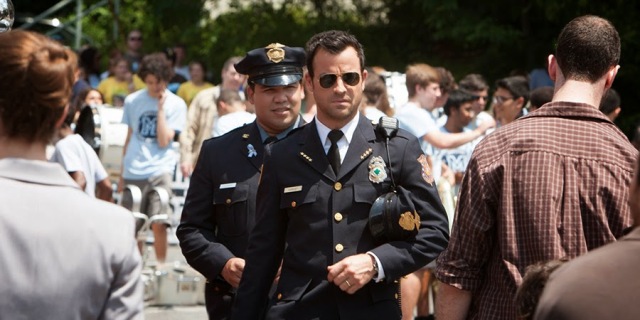 Granted, the entire concept of The Leftovers — that of a broken family trying to cope after 2% of the world’s population mysteriously vanished and threw society into chaos — is no dramatic walk in the park. In fact, it’s a perfect opportunity to tap into more melancholy depths of entertainment that films like Prisoners recently have.

The Leftovers has a lot of potential to reap similar benefits but, judging by its premier episode, might fare better with a lighter touch.

It was a plain old day three years ago on October 14 when millions of people around the globe simply vanished. Since then, things have been a bit stressful in the town of Mapleton, New York. Police Chief Kevin Garvey (Justin Theroux) is fraying under the stress of his job, around town and at home. In addition to trying to raise his emotionally wilting daughter, Jill (Margaret Qualley), alone, the presence of a local cult has pushed tensions to the breaking point in Mapleton. Named the Guilty Remnants, these religious fanatics have taken a vow of silence, dress all in white and chain smoke while they stalk seemingly random members of the community. Worse still, Kevin’s wife Laurie (Amy Brenneman) is a member. Meanwhile, Kevin’s son Tom (Chris Zylka) has dropped out of college and allied himself with a different sort of cult, one that could be even more dangerous.

Upon initial viewing, The Leftovers proves it has a concept worth tuning into and more than a few good story seeds to build off. The general mystery surrounding what happened to all those people, what the deal is with these cults and whether people will crack a smile ever again are all left up in the air. Theroux casts little doubt on his ability to carry the show, as his character will certainly be put through the grinder again and again. Christopher Eccleston and Liv Tyler are also introduced in a way that practically announces that they’ll have bigger, meatier roles coming up.

But of course this is a show from Damon Lindelof of Lost fame, so don’t expect answers to plentiful or satisfying. And you know what? That’s ok. Obviously there will need to be some character-related questions that need answering but the show, theoretically, could get away with not exploring the cause of the “Sudden Departure” at all (except there are already a few hints that alien shenanigans might be happening).

That’s because The Leftovers is a show all about tone. Plot based technicalities come second to creating a feeling that one character sums up well as “intense and melancholic”. There’s a profound sadness that drenches every scene. If that’s not your thing, there doesn’t seem to be much counterpoint to it. For those like me who find some enjoyment in the melancholy, there will likely be at least one thing to appreciate throughout.

They’ve got the melancholic down; now if only they’d back off the intense. Even with the overwhelming sense of grief, there are still moments that feel the need to push it to a seemingly desperate degree. A screaming baby opens the show while a dog gets murdered not three minutes later. Pilot director Peter Berg several times goes for the ever-cheap, ever-annoying tactic of taking things from whisper-level quiet to gunshot-level loud within seconds. The concept of the show and the psychological implications of it are enough to create tension and drama, so when The Leftovers devolves into, essentially, jump scares, it feels like everything has been brought down a peg.

Again, this is just the pilot episode with a lot of room to grow. On the whole, the promise of more mouth-watering anguish is still enough to keep interested, as are characters that, thus far, are largely more likeable than ones in, say, Game of Thrones. At very least, we can probably expect less incest.