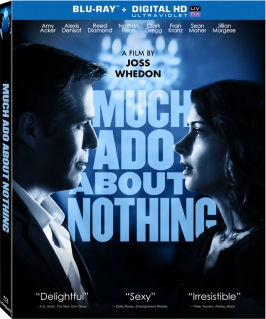 Much Ado About Nothing (October 8)

Given that the movie never really gained a true “wide” release in theaters (wide is only wide if it reaches the dinkiest of towns, re: Mankato), home video is where most viewers will enjoy Much Ado About Nothing. Honestly and truly, this is the best way to view it.

Being a micro-budget adaption of a stage show that looks like it was shot by a film student and his troupe over a weekend, Much Ado About Nothing doesn’t do much to justify a visit to the theater but should play wonderfully at home. Even if Shakespeare isn’t your cup of tea, Joss Whedon’s direction (simple to a fault production withstanding) and the actor’s performances should win over most viewers and garner more appreciation in the right environment.

The Purge is a pretty interesting sci-fi concept that’s squandered on a not-that-interesting home invasion thriller. Having a world where all crime is legal one night a year doesn’t receive any exploration beyond being an excuse for the police to not show up when some inexplicably masked goons show up to stalk and murder. Even the power-duo of Ethan Hawke and Lena Headey, along with that creepy Reese Wakefield guy, can’t pick up the slack after the initial interest of this dystopian future is dropped for the cheap, routine thrills the producers knew they could cash in on.
For the sake of being ironic, it would be appropriate to say that The Purge will purge itself from your memory within a few hours of viewing. The saving grace is that it’s a shockingly short movie, given today’s average runtime. Good for a rental, not much more. 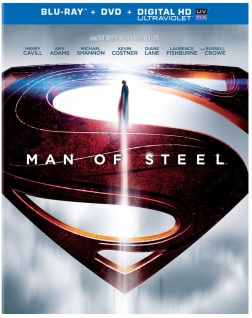 Man of Steel is not a perfect movie. I get that (and I’ve gotten that over and over in the past two months — enough, thank you).

But I’m gonna say what I said last year when The Amazing Spider-Man hit to a fair amount of praise and a lot of concentrated bullshit from the other side of the aisle– issues included, if you put your clingy, fanboy entitlement aside for a minute, you’ll be able to see that the movie is a pretty damn entertaining blockbuster and a far more realized and relatable portrayal of a classic hero.

Man of Steel does a lot more right by Superman than it does wrong. The cast is phenomenal, the score moving, and the first half of the film paints a harrowing new picture of the world’s greatest superhero as it sets up this brand new take. This all leads to a much more action-oriented second half but what it lacks in thoughtfulness it makes up for in thrills as we get the top notch action not seen before in a Superman flick.

Even as it enters its much maligned climax, the movie remains exciting throughout, enough so to be remain in the better half of this summer’s offerings. Man of Steel‘s strengths should carry over nicely to video but a small clause should be attached: while the picture and sound will no doubt kick ass, Warner Bros. hasn’t been the greatest about special features (this edition including a decent four hours worth), nor have they been very satisfying when it comes to their “Ultraviolet only” stance on digital copies. The film is currently going for the pre-order price of $24.99, but seeing how The Dark Knight Rises did the same last year, then ended up around $17.99 in its release week, I’ll go ahead and say…

Buy It (When the Price Drops)!

World War Z (September 17)
It’s surprising to think back now on how far World War Z flew under my radar beforehand and how high over my expectations it delivered after.
Nothing should have worked here — an ever-ballooning budget to a trouble-some production, wild deviations to the source material, the director of Quantum of Solace at the helm, Brad Pitt in general, Damon Lindelof contaminating the script’s ending– it all should have combusted into fiery movie-death.
Guess what? It didn’t and thank whatever deity for that because the movie rocks.

World War Z is a lean, mean ride that keeps the tension up all the way through. There’s a perfect amount of grand-scale zombie spectacle and old-school survival horror at play throughout. Only the wrap-up falters but thankfully doesn’t detract from the efficient and exciting movie that came before.

There were some that bemoaned the lack of zombie gore we’re accustomed to these days in order for the movie to secure a PG-13 rating. These people should be pleasantly surprised to learn that the Blu-Ray release will contain an unrated cut to satisfy one’s need for dismembering and disemboweling.

In addition to the new cut, expect the bevy of bonus features and pristine picture and sound of a Paramount release, as well as that oh-so-realistic price of $19.99.

Must Own!
White House Down (November 5)

[UPDATE — 8/22: Seems new info has arrived suggesting WHD has moved back a week to November 5. Appropriate, really, since it’s election Tuesday. Expect official word in the next week or so.]

No word yet on the home video release of Roland Emmerich’s latest action-fest but October 29 is the date that’s been pegged to it since release and if word says differently in the next few weeks, I’ll let you know.

In the meantime, I’ll also add that the movie is a lot of big, dumb, cliched action fun that will benefit heavily from the addition of a fast-forward button.

Imagine it: you’re the editor this movie needed and your job is to trim the massive bloating! What will go first, the overlong character introductions or entire subplots that should have been left out for the sake of pace? What will it be?

Rent It
The Rest: 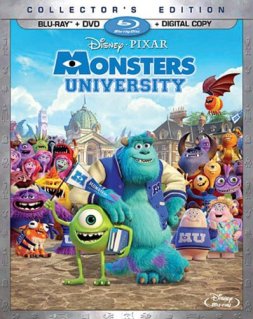 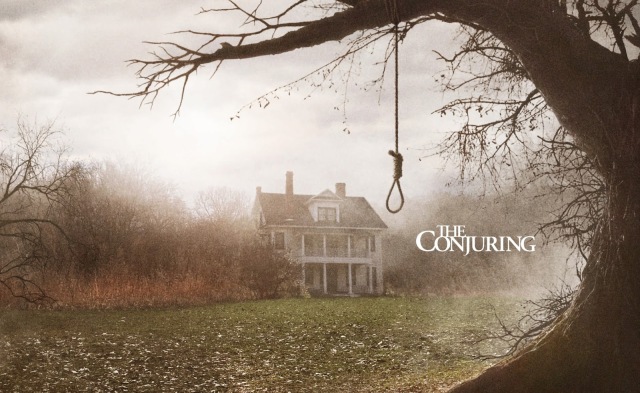 It’s pointless to try and go over a list from the past five years of all the haunted house, exorcism and horror movies that haven’t worked, be it either from familiarity or production laziness. The genre itself just seems tired and all-too-willing to fall back on mediocrity.

While there’s not a whole lot about The Conjuring that screams originality, there is something to be said for familiar elements that are executed well. That’s just what The Conjuring is — a superbly executed horror movie out to terrify with mood and imagery that ends up being more effective than ever thought possible.

The film starts out with a short vignette about a possessed doll — a sort of fourth wall breaking wink that the movie is directed by James Wan, purveyor and creator of creepy puppets from Saw and Dead Silence. The sequence itself is pure cheese and tonally not the best indicator of what’s to come but it does at least let us know that as much time will be spent with our paranormal investigators as with the actual family.

From there on out the movie slowly builds the tension by letting the atmosphere sink its way into your bones before the supernatural happens. Subtle things like all the clocks stopping at 3:07 a.m. and the music box with an interesting view are just as chilling as some big boogie. As the tension hits its high and stays there, the haunting becomes more and more malevolent, giving the movie some of its most memorable and intense moments.

The movie runs a gamut of things usually found in horror flicks: creepy puppets, women in white nightgowns, possession, haunted items, witches, children in danger, gnarled old trees and other bone-chilling tropes. Some may see all these as too familiar but the execution keeps things from being completely predictable. The cast do an exemplary job of selling absolute terror and Wan keeps the tension going until the best possible moment.

The Conjuring screams classic horror, be it due to the themes or Wan’s playful throwback style of filming and even with its clear time setting in the ’70s, the scares feel completely timeless. It’s easily a movie you could revisit every year around Halloween and revel in the perfect horror movie atmosphere, even if you know where the jumps arrive.

The thrills are good and the chills are better and it’s because of this that The Conjuring has a place carved out for it among the more effective and crowd-pleasing horror movies in recent memory.

For that, a small round of applause is in order.

I’ve got to be honest, while I wouldn’t call this summer’s crop of movies “bad”, there hasn’t been anything released that reached above a plateau of “really good” and blew me away. Things were looking a little underwhelming as we approach the end of the season.

Then I saw Mud.

Director Jeff Nichols’ 2011 film Take Shelter was an under-the-radar darling for apparently all of the online critic community and a film I was just ok with. Michael Shannon was amazing (as he is in every role) but the movie around him was somewhat lacking. Likewise lacking are many of Matthew McConaughey’s previous choices as an actor. Given the circumstances, I can see why I was hesitant at first to dive into Mud but, man, am I kicking myself for not seeing it sooner.

Mud is a movie made up of several different layers, all of which fully deliver. A coming of age story in which our young protagonist, Ellis (Tye Sheridan) loses his naivete about life (particularly women) meshes beautifully with the big brother figure he finds in Mud (McConaughey) and the hunted criminal on the run story he has going on, all of this set against a backdrop of the Arkansas delta that’s both majestic and authentic.

So often with indies and character dramas, Take Shelter included, it seems the character strength comes at the expense of momentum in the story. There’s always a point, sometimes two, where the movie gets too lost in itself and thus loses me. It’s damn near impossible to take your eyes off Mud. The film is edited like clockwork and essentially tells you from the beginning what it’s building to, all while relishing in the grounded characters at hand and emotional setting. Not in a long while have I been so engaged for over two hours.

Not that I ever thought I’d say this, but it’s far from a fantasy to think that McConaughey could be up for some awards buzz in a few months — he’s honestly that good here. If the past two years have been his reinvention as a legit actor, this is the crown jewel. Our main kid, Tye Sheridan, is equally impressive, proving that child actors can pull their own weight and deliver as sturdy and fearless a performance as any of the adults. The main duo has some terrific backing from the likes of Reese Witherspoon, Sam Shepard, Joe Don Baker, Ray McKinnon and Michael f*cking Shannon himself.

It would be impossible to go on listing off all the names of people who knocked it out of the park with this movie because it is a film where everyone is at the top of their game and firing on all cylinders. But if there needs to be a hero to this story, all credit must go to Nichols for writing a script with such maturity and depth and directing a movie that executes it to the greatest possible effect. If he continues to make movies like this, I am on the Nichols train for life.

My faith in indies has waned for a while now and this summer’s blockbuster crop wasn’t doing me many favors either. Whatever genre and whatever season it was released in, seeing Mud did me a solid and reminded me of one thing: there are still filmmakers out there making great, great movies.