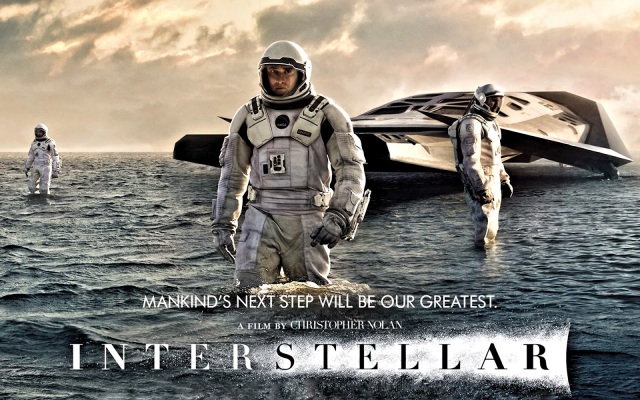 At the risk of sounding like a Nolanite, let me just say that Christopher Nolan is one of the most respectable filmmakers around. Outside the obvious praise of him giving us the hands-down best series of Batman films to date, the hit director is commendable for intelligent, mind-bending stories exploring science and psychology, as well as his preference for practical effects and shooting on traditional 35 mm film.

With Interstellar, Nolan turns his focus to space travel, mixing in a heartfelt family drama with profound concepts like wormholes, relative time and gravity. At its best, Interstellar is majestic space odyssey rife with amazing visuals, intriguing concepts and good performances. But at its worst, suffering from a full, disjointed story and criminal pacing issues, Nolan’s answer to 2001 sometimes feels like it hasn’t delivered on its potential.

A resurgent dustbowl has wiped out all viable crops on Earth except corn, and the future of the human race looks grim. When former pilot and current farmer Cooper (Matthew McConaughey) receives mysterious coordinates from an unseen specter, the struggling father is led to a secret NASA operation headed by a former colleague to look to answers beyond our solar system. Using a not-too-distant wormhole, a plan has been put in motion to send a team to survey far-away worlds that can sustain human life — a plan they need Cooper to pilot. Leaving his devastated daughter Murphy (Mackenzie Foy, Jessica Chastain) behind, he embarks for strange new worlds, but can he ever make it back to Earth and if so, will it even be in his children’s lifetime?

Much like Inception, there’s no lack of ambition at play with Interstellar. Space travel isn’t a daring new topic in the film world but the details of Nolan and his brother Jonathan’s story are. It’s beyond admirable that these two can craft an engaging (well, mostly…more on that later), accessible story using high-concept theories of hard science and, for the most part, make them work in their favor.

As per usual, Nolan’s look and sound of Interstellar is top-notch. Despite splitting from mainstay cinematographer Wally Pfister this time out, the look of Interstellar is breathtaking. Space is a surreal experience here, as distant worlds and otherworldly anomalies are brilliantly rendered on screen. If any film is destined to emulate the elaborate visual trippiness of Kubrick’s 2001: A Space Odyssey on screen in this generation, this is it.

Likewise, frequent collaborator Hans Zimmer largely ditches the booming bass drums and low brass wall of sound for this score in favor of a more spiritual, majestic sound — complete with pipe organ —  that is invaluable to the emotion of the film.

On the topic of emotion, there’s a significant amount at the heart of this film. Nolan is a master of ratcheting up the tension, providing overwhelming stakes to Cooper’s mission (like, say, the fate of the planet) and dire consequences for each mistake.

At least part of the reason this works is because of the bond between Cooper and Murph, a more traditional motivation that grounds the movie quite well. Nolan likes to keep his players cool and collected much of the time and McConaughey, Anne Hathaway, and Jessica Chastain oblige, but each are given notable opportunities to cut loose that hit home.

So, if all these elements of the film work so well — including an entertaining final act that starts as a thriller and ends diving into full-blown science fiction after several overt hints — why doesn’t the movie as a whole feel overwhelmingly good? It might be due to the fact that there’s a lot of movie going on with Interstellar; too much. To generalize, a great many 3-hour films don’t justify their runtime and Interstellar, at 2 hours and 49 minutes, falls squarely into that camp.

The final cut of the movie suffers from frequent sections of dragging while the script is in desperate need of doctoring to smooth out the extended sections of sciencey exposition and explanation, not to mention the somewhat episodic nature of the story as the team visits new worlds and deals with the hurdles each brings. It’s like Inception but not as good as Inception.

In fact, smoothing out is the perfect description of what this story itself desperately needs, especially in editing the script to trim the bloat and get the movie to an acceptable length. There’s a lot to cover with the film’s current story and one can’t help but wonder if trimming one plot thread, planet, concept or character would have helped. Interstellar is a smart film but it’s a rambly smart film when all the pieces are in place for it to be a concise one. Just because the material is epic doesn’t mean the length of the film needs to pump itself up to similar proportions.

Because of this, there’s a really disappointing feel at times in the movie — like you’re being kept at arm’s length investment right at the moment you’re feeling closest. As mentioned, Nolan’s space epic can be completely engrossing in parts but they’re sadly often followed or proceeded by parts that don’t match up.

Far be it to say Interstellar is a bad movie, it’s not. In so many ways it embodies why we go to the movies in the first place: to be transported to far away worlds and see something we’ve never seen before. It even throws in the bonus of making you think a little bit. Sure, there’s a frequent feeling that this good movie could have been great with more care in scripting and pacing but Nolan’s latest succeeds on visceral entertainment (a screening in true IMAX is a must for film junkies), performances and admiration for making a film about relativity interesting.

It may not be the knockout success akin to some of his earlier films or what some of us may have been expecting, but it’s far from something to turn your nose up at.