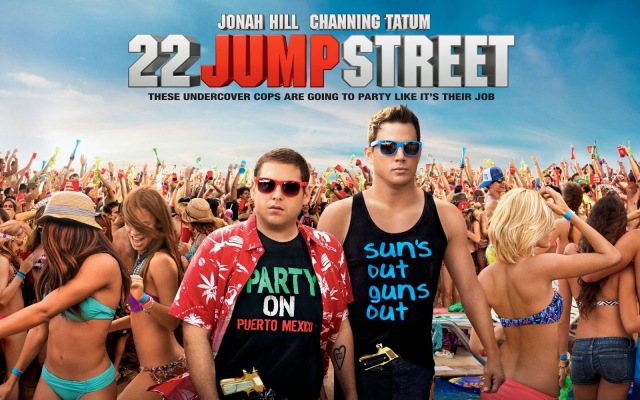 “Do the same thing. Everyone’s happy.”

From the very opening, 22 Jump Street announces that fact that it’s a sequel. Hell, it can’t stop reminding us of the fact and how it intentionally sets out to repeat the outline of the first film. There are so many worse films to repeat almost verbatim than 21 Jump Street but if you’re going to take the beat-for-beat approach, cynicism can only get you so far.

After making a mess of things during an undercover drug bust, Schmidt (Jonah Hill) and Jenko (Channing Tatum) are told in very 4th wall-breaking terms that they’ll be headed back to Jump Street to do what they do best, this time at college. And once again, the bromantic couple start drifting apart in their investigation, this time thanks to Jenko bonding with the football team and frat house. Will the duo ever get back together or will they go their separate, ah fuck it. You know how this goes. After all, you’ve seen it already once before.

Phil Lord and Chris Miller are on a roll lately after the runaway success of The LEGO Movie and 22 Jump Street is hardly a mark against that. Like it’s predecessor, the film knows that it’s got magic in the form of Hill and Tatum’s chemistry, as well as Lord and Miller’s irreverent humor. But watching the film you can’t help but wonder if the movie is too cynical about its existence for its own good.

There are some funny, funny moments in 22 Jump Street. Ice Cube’s epic food freakout, our protagonist’s even trippier, well, trip, a cameo or two from the first film and Tatum kind of admitting White House Down was a bad idea — take your pick. But there’s also a huge dry spell in the middle of the film where Lord and Miller seem content to simply revisit the conflict of the first movie without adding anything all that comedic. Sure, there are a few chortles but on the whole, everything grinds to a halt.

In the absence of truly funny stuff happening during this stretch, Lord and Miller fall back on the idea of more sequel related stuff and it wears thin fast. The film feels almost every minute of it’s near two-hour runtime and while it does eventually pick back up, there’s no shaking the feeling that they shouldn’t have to dwell so long on obligatory drama that they got down pat in the first movie.

The action sequences do their job and feature a few really good gags, while the addition of Peter Stormare and Jillian Bell are wholly welcome. Even at their most under-utilized, Hill and Tatum can still light up the screen with their presence and the directing duo know how to pull some truly hilarious, unexpected material out of thin air.

A little bit of self-awareness is always appreciated but not as much when you rest the entire movie upon it. The parts are all there to make it work again but the movie gets too caught up in its own defeated purpose to get the most out it. Just because you’re a sequel doesn’t mean you have to try less. It’s what can make the difference between complete hilarity — the first movie — and above-average amusement — this one.