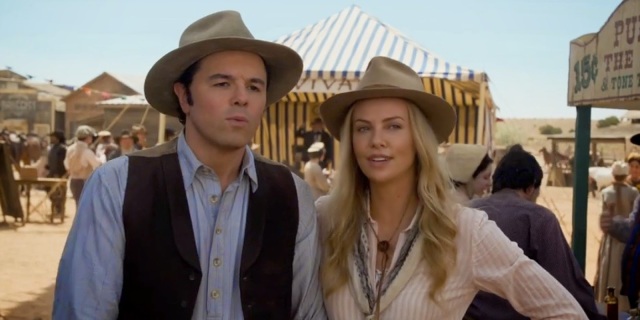 Astonishingly, A Million Ways to Die in the West is both a baseline comedy and an inside joke — neither of which are remotely funny. Seth MacFarlane’s follow up to the smash hit Ted promises a skewering of old west lifestyle and tropes. Instead, the film settles for having its comedic reach go no deeper than a man violently shitting in a hat for two minutes.

Cowardly sheep farmer Albert Stark (MacFarlane) is desperate to get his vain girlfriend (Amanda Seyfried) back. With the help of a mysterious new woman in town (Charlize Theron), Albert challenges his mustached nemesis (Neil Patrick Harris) to a duel for his dignity. Little does he know that the help he’s receiving (and growing closer to) is from the wife of one of the west’s deadliest outlaws (Liam Neeson).
MacFarlane takes center stage in what feels like a pet project of his that never fully translates to the screen. Quite the opposite of Ted, West abandons the reference-based, highly-edited comedy stylings the Family Guy creator is known for in favor of a much more traditional, straightforward film that utterly fails. The normally funny MacFarlane is out of his element as both a leading man and director, delivering a film that is on par with his weakest FG material.
West simply has no scope. The talented cast do their best with the material (Harris is a glimmer of light in the coal mine) but there’s not much going on other than scat humor and ideas that, while clever in mention, are absolutely beaten into the ground through repetition. Even the Arizona setting itself, supposedly vast and unchecked, looks completely confined to the dull sitcom story.
Instead of clever laughs, West gets hung up on hollow sentiment as MacFarlane and Theron share no less than four aimless scenes chatting about the same old stuff, trying to build Albert’s confidence. At a point it feels like the film completely throws humor out the window to try and be a satirical drama. Maybe it should have taken that route, since so little of the comedic side was clicking from the start. At very least, they could have spared us a runtime of nearly two hours. Two stoney-faced, unamused hours.
Hitting just about every misstep a comedy can, A Million Ways to Die in the West is a squandered opportunity. What no doubt sounded like a hit on paper ended up being an R-rated comedy that only 12-year-olds can appreciate.
2/10