Yes, glad to hear this segment went over so well and because it did, I’m glad to continue bringing the home video deets as soon as I can and continue to update this page with more official info as it becomes available. 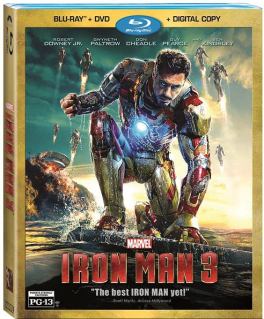 What is arguably the best superhero movie, and movie in general of the summer makes it home video debut in the regular late September slot. There was some early word that it may street in the last week of August but it seems Disney/Marvel is quite comfortable sticking to the plan (especially when the likes of Pain and Gain and another later entry are also going with that day).

Shane Black’s take on the armored Avenger is much different from what’s come before and that’s a good thing. It’s still got a stellar cast and the zippy humor is better than ever but more importantly the character focuses are even stronger. For once it feels like you’re allowed to care about Tony and the gang, even if it’s still fairly certain they’ll make it out unscathed in the end. Villains could still use some work, with the Extremis aspect of the show being rather underplotted and a twist with The Mandarin that’s still sitting in the 50/50 range.

Even with these gripes Iron Man 3 has held up as the most enjoyable superhero movie of the year and my personal favorite of both the summer and 2013 in general. I’d be more than happy to purchase it on Blu-Ray (which I’m sure will look and sound magical), and with the bonus features added here, it may be one of the most acclaimed disc sets of this year. Included are several deleted scenes (a must because who doesn’t love more RDJ), a Marvel-One Shot featuring one of the best things about Captain America: TFA, Peggy Carter; a sneak peek at Thor: The Dark World, and, as they say, more!

This is definitely on to add to the collection, post haste!

The longest, shallowest music video to hit theaters this summer slogs its way to video in late August.

I can’t say how being a fan of the book would impact one’s take on the recent movie but Baz Luhrman’s adaption of Fitzgerald’s novel is universally style over substance. It has some decent performances and it sure may look and sound pretty in HD but those seeking more than that may be turned off, bored, or a combination of the two by the recent over-long snoozefest.

Star Trek Into Darkness was one of my top anticipated movies this year. I honestly couldn’t wait for the next outing in J.J. Abrams’ revamped universe to hit home like the first movie did. What I got was fun — simply fun.

Looking back now, I probably should have scanned over who was in charge of the script in order to readjust my expectations. Damon Lindelof’s name on the roster should have been a better indication that the movie would have hollow, stolen moments from previous Star Trek movies, a massively mishandled villain, and less of a punch to it overall.

Into Darkness is still a fun movie, to be sure.  Everything looks and sounds top notch and the cast continues to play off each other exceedingly well. I’ll be kicking myself on my oversight in the writing aspect for a while but STID is still one totally re-watchable movie.

Paramount is just about the best studio putting out Blu-Rays right now. The picture is always gorgeous, the sound rocks (quite literally) and the special features are plentiful, especially in this case. Take into account that the 2D combo pack is still selling for the super-reasonable pre-order price of $19.99 and Star Trek Into Darkness bumps itself up to…

[UPDATE #1, 8/16: word has it the date is being shifted back to December. More info to be announced as available.]

Sorry guys and gals, as of this writing there’s no official announcement on the recent blockbuster. No official date, official artwork, official special features; nothing official. Seeing how it’s one of the biggest movies this year, though, it seemed necessary to pass along the widely circulated release date and the fact that it’s still up for pre-order.

I’ll be updating this area when more word becomes available but just know that Furious 6 (or whatever they’re calling it) is a fun movie in the dumb action movie sense of bare minimum script and characters that does unfortunately run too long, especially in the action set pieces. Regardless, it’s a good bit of simple fun, so…

Now You See Me (September 3)

Now You See Me didn’t do too bad for itself in theaters but it feels like a movie that’s bound to do even better on video and cable, partly because of how it’s made.

That can be taken either way.

The movie is a bit of light, zippy, summer fun on a modest budget with most of the money likely going towards assembling a cast of all stars to play off each other. Unfortunately, for all we know, that money looks to have been siphoned out of the writing portion leading to a script that features bad dialogue, flat characters, and a problematic twist. It’s not a terribly bad movie but it’s not a terribly good one either.

If you find yourself with two hours to kill, you can do a lot worse than Now You See Me. 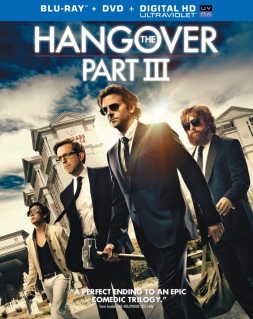 The sad thing is that the film fails on almost every level but does nothing so heinous as to deserve any feelings, negative or negative, about it whatsoever (much like Will Smith’s painful performance in the film). And yet, I still roll my eyes every time I think about it and attempt to pretend it doesn’t exist, and more importantly, that I didn’t spend almost $9 on admission.

If there’s any trace chance you think that this is a “so bad it’s good” movie, sweep it away because you’re in for five minutes of hilarity and over 90 more of stagnant boredom.

Run! Run from the bullshit!

One thought on “UPCOMING HOME VIDEO RELEASES (MAY 2013 RELEASES)”