With the exception of Alan Silvestri returning for The Avengers after scoring Captain America, Marvel has generally sought a different musical identity with each of their Phase 1 films. But with this new Iron Man score and Tyler assuming duties for the upcoming Thor: The Dark World from Patrick Doyle, this looks to change up a bit for their Phase 2 movies.

The Iron Man movies all stand apart from one another, part of that being due to each movie having a different composer and, by default, a different theme. Ramin Djawadi’s score for the first movie had its simple, catchy moments and a decent theme, yet felt smaller than a movie like that might suggest. John Debney amped things up a bit for the sequel and kept things fun and light but the music remained in the standard fare category.

So how does Marvel newcomer composer Brian Tyler’s score stack up in this series? Surprise or not, mostly in the same league as the others while adding some new strengths to the mix.

Tyler’s score is by far the biggest Iron Man score yet and occasionally outshines other Marvel scores that are more inclined to be so grandiose. We’re talking full orchestra, choir, added guitars — the whole deal.

While it’s not expected to become legendary any time soon, the theme of Iron Man 3 is a few steps ahead of its predecessors. The motif for Stark and his metallic alter-ego makes no bones about being a full-fledged hero theme and even plays around with something of a key shift in the end of the phrase (geeky little aside).

Unfortunately, like the last two movies and most Marvel movies in general, we still don’t have a real, standout theme for our villains. Hopefully in the future we’ll be able to get more than just seething bass figures and expository drum hits.

“Everything else” boils down to the cutesy emotional moments like the tracks “New Beginnings”, highlighting Stark’s new lease on life and “Extremis”, meant to convey the wonder of this new virus’ capabilities. These tracks don’t add terribly much to the mix but are a nice breather from the overall seriousness of the album.

The action and intense brooding tracks are often intermixed, making it hard to differentiate the two. A standalone brooding track is “The Mandarin”, used during the terrorist’s videos. “Dive Bombers” is an interesting mix of the two, being technically light on music, using rhythmic percussion to drive up intensity during the Air Force One rescue scene and ending with the Iron Man theme in all its glory.

“Heat and Iron” and “Battle Finale” make up the final battle music at its most thematically bombastic, just like “Attack on 10880 Malibu Point.” These three tracks are the definitive action tracks of the score and should easily satisfy anyone seeking true action music.

But it’s in the two badass tongue-in-cheek tracks that really give the score it’s shining moments and sets it apart from previous Iron Man scores. The second half of “The Mechanic” sees Stark’s McGuyver/Unibomber stint as he infiltrates The Mandarin’s compound and  brings it to life with a jaunty super-spy basis, complete with added guitar and the theme weaved in. Let’s not forget the quick cameo by sleigh bells. It is a highly addicting deviation and one that shows this score wasn’t just going through the motions.

The other definitive track on the score is “Can You Dig It”, the infectious ’70s TV show rock version of the main theme played over the end credits. It was an original way to do an end credits sequence in the movie and its a memorable way to do it musically.

Most of the tracks are solid but these two are exceptional — almost worth the whole album price.

However, just like many score albums these days, the tracks are not in the same order as the movie. This is something I still cannot understand because if it’s good enough to successfully match the flow of the movie, why can’t it do the same on its own?

As is, the album runs a little long with things getting somewhat stale in the middle.

Gripes aside, Tyler’s work on Iron Man 3 is good solid fun with two phenomenal standout tracks. Pick and choose what you will for most tracks but be sure to listen to “The Mechanic” and”Can You Dig It”. 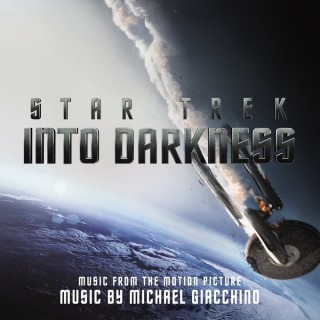 There’s a reason people call Michael Giacchino the new John Williams. Since he first appeared on the scene with his work on Pixar movies, his scores have become something to look forward to in their own right (Dawn of the Planet of the Apes has even more going for it now).
His breathtaking work on the first of J.J. Abrams’ Star Trek movies did the movie an enormous service in bringing that world to life. Now, Giacchino is back for the sequel and, like the movie itself, upping the ante for a more intense second outing.

Star Trek Into Darkness is comprised of big moments and appropriately its score is a massive one, utilizing the full orchestra every chance it gets for those big moments. Big action set pieces are met in full with big emotional beats.

Nothing encapsulates the full raucous action/adventure spectacle like “The Kronos Wartet.” Many tracks have whimsical adventure seeping from them but the first minute and a half of this one tops them all in intensity. The full-on ferocity of the Klingon pursuit scene’s music, complete with chanting choirs and 7/8 time, is a thrill ride in itself and had the 5:30 track not been comprised mostly of buildup music to the next action scene, it would have been a masterful track to play on loop. As is, it’s simply memorable and fun.

On the other side of the coin of massiveness is “Warp Core Values,” a sweeping track of sacrifice for the greater good, which will rip those emotions out of you, whether you want it or not.

And yet, for all the big sounds at play, it’s the more restrained tracks that make more of an impression. The intimate sounds of the piano in “London Calling” and “Buying the Space Farm” bring a depth that the script couldn’t, the former being something of a revelation for a summer blockbuster score for just how personal it sounds.

Even the big baddie’s theme (a simple three-note figure on loop, of which there is somehow still not enough of on the album) works best when it’s creeping around in the background instead of blaring in the forefront.

One of the movie’s biggest flaws was that its parts were impersonally harvested from previous Star Trek movies. Thankfully, that’s not a problem that carried over to the musical side of things. The theme established in the first movie returns but by and large the music presented here is written specifically for the movie. While it’s good that Giacchino isn’t falling back on previous material, it almost goes too far in the other direction.

In writing music specifically for each scene, there is a lack of thematic flow-through. Everything presented can feel segmented instead of being one big musical piece. It’s not the worst problem to have since much of the music fits what’s on screen like a glove but it keeps the album from being truly top-notch.

The future of Abrams’ Star Trek movies is a mystery (seeing how another well-known space epic is set to go under his hand) but even if number 3 is not to be, we can all rest easy knowing that Giacchino has put forth another saga of great movie music. 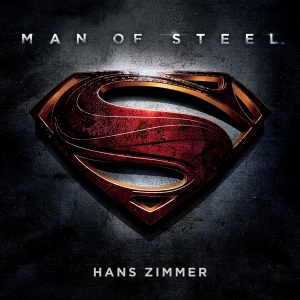 Before we begin, a question for you: Is it even feasible to still compare any score to the work of John Williams, the undisputed king of film music?

Answer: No, stop doing that.

Now that that’s out of the way, here’s the scoop. Hans Zimmer’s work on the now finished triage of Batman movies left quite the mark on modern film music, enough to bring serious consideration his way for DC’s other, more colorful and optimistic hero.

While the darker, more aggressive style Zimmer has perfected as of late may not seem automatically suited for the normally cheery Superman, his work here sets the tone for the entire new take on the man of steel, not just in the more somber, intense action of it but in personifying the themes of hope and pursuing goodness that are prevalent in the movie, making for a unique score all its own.

Zimmer’s score here is powerful. Not loud — powerful. Yes, it’s high on the decibel meter (what score of his isn’t?) but for every drum hit or synthesized effect, there are both swells and quiet moments that tap into the themes that run under the surface in a gorgeous way, be it both bombastic or intimate. Much as his work on Batman was a turning point for that character, his work here is key to establishing the current take on the character and he nailed it. The score to Man of Steel is one of the best so far this year.

True to his approach on the Batman movies, Zimmer works by layering themes for certain parts of the movie rather than one main one. The use of triplet figures and the major fourths and fifths theoretically ties together the whole sonic universe while different motifs and instruments signify their own things.

Zimmer has an array of new sounds at work, including an ethereal synthesizer akin to a wet finger circling the rim of a half-full wine glass to signify big blue’s home world and slide guitar to capture the magic of flight.

The very first recurring aspect is the repeated use of the major fourth sound, which acts as effective foreshadowing. We know that Superman is off in the distance but as the simple musical idea develops from backing to theme, so too does our hero’s path to superheroism.

The first and biggest emotional impact that is made in the movie is found in “Goodbye My Son.” The lullaby-esque female voice humming those sorrowful notes as a mother and father give up their son hits home. Lucky for us the goosebump-inducing theme we’re introduced to does come back several times. For clarity’s sake, it morphs into what could be called the “Superman theme.”

Almost as a dark mirror to the aspects in Superman’s theme, the theme for Zod and his fellow Kryptonians is an identifiable, assertive march forward that will beat its way into your consciousness once heard. Not as overwhelmingly aggressive as Bane’s theme but still in that vein of repetition for a similarly powerful military villain. The tune hits its biggest point in “I Will Find Him,” titled after the lolsy line in the beginning of the film.

As an album, this is Zimmer’s least aggravating release in quite some time. Nowhere in sight are the countless remixes that plague his albums (unless you buy the delux edition). Although in somewhat jumbled order, most of the material that appears on screen makes it to the final album cut. Only Lois’ escape from Zod’s ship is noticeably missing. Otherwise, even with the slight changes in order, the album itself is highly listenable, with all but a few tracks building upon each other whilst providing new material to enjoy.

As a score, Zimmer’s work here is fantastic. The breathtaking new soundscape does a perfect job of conveying the tone of the new world and gives some more-than-decent themes as well. Zimmer’s music not only fits in perfectly with this new Superman series, it’s a cornerstone in defining it.