The June releases are being a fucking pill. Here we are in late August, and not even half of June’s offerings have solidified their home video release dates. Damn you, Hunger Games. You had to pick the 5 month release window and now you scared all the other movies off. I hope you’re proud.

Movies in June that probably won’t make too big of a splash on video (or aren’t worth going in to too much detail): That’s My Boy is October 16, Madagascar 3 is also October 16, Rock of Ages is October 9, Madea’s Witness Protection is October 23.

Because July has roughly only two or three huge releases worth focusing on, Part 3 will include Ted and Magic Mike since there is zilch info concerning them at this point.

Snow White and the Huntsman

One bad casting decision can totally make a movie implode upon itself. Luckily, the casting of Kristen Stewart didn’t completely sink Snow White and the Huntsman, since it has some genuinely enjoyable things going on.

This movie ultimately succeeds due to its strong visual style and scenery-chewing performance by Charlize Theron. And, to my surprise, K-Stew is actually tolerable for most of the movie. Only when she has to give the corny, faux-inspirational speech does my acceptance sputter.

The big thing with this release is that it is an extended edition. Whether that means that an entire subplot is put back in, the rating has changed, or it’s approximately 52 seconds longer like most extended editions is still unclear. However I will be looking at the behind the scenes special features to catch a glimpse of the “special work relationship” between Stewart and the director. And/or how hard the producers try to sidestep that aspect.

Blu-Ray Release Date: October 11 (Rental: November 8)
On October 11th, prepare to experience the disagreement at home. One of 2012’s most anticipated and controversial films is sure to bring some far from unanimous opinions to the household.
There are two distinctive reactions people have had to this movie. First there is the camp that sees it as a thrilling sci-fi ride; a gorgeous-looking movie that asks big questions and takes viewers on an entertaining journey with standout performances. The other half practically loathes the movie for taking its story ambiguity to the point of being sloppy and full of holes, not to mention the general retarded-ness of a majority of the characters.
More so than some other movies this summer, I fully get both sides of the argument. I lean more towards the first half since I was pulled in for two hours, but the lack of logic is so blatant that very few people are likely to not have a “what?” moment somewhere in the movie.
The big news that’s spread in recent days is that the Blu-Ray is supposed to contain up to 40 minutes (?!?!?) of deleted scenes. If edited back into the movie, that’s more than enough to classify it as an extended edition or director’s cut. And judging by the names of each deleted scene, they could be what provides answers to the many questions the movie left us with.
Worth noting is that, like the (first) video release of Fox’s other big space epic, Avatar, Prometheus is landing on a Thursday.
MOVIE: + (NO GUARANTEES, THOUGH)
SPECIAL FEATURES: +
DIGITAL COPY: +
Brave

Blu-Ray Release Date: November 13 (Rental: December 11)
Pixar once ruled over everything the light touched when it came to producing quality animation in everything from reviews, grosses, and awards consideration. Then Cars 2 came along and threw it off a cliff after smugly proclaiming “long live the king”.  Now, rather than jump right back, it’s going to take a little time to recooperate before it reclaims its throne.
Brave is not a bad movie. In fact, it’s pretty good and I liked it for the most part. All the technical aspects you’d expect a Pixar movie to excel in are great. However, the story plays more like a light, whimsical, stereotypical Disney movie than something with a good deal of depth like most previous Pixar movies. It’s not a big complaint since that formula is tried and true, but there’s a chance that older audience members may not find as much to interest them.
There isn’t any info concerning special features at the moment, but animated Disney movies usually contain a bunch of interactive games for the kids and shit like that. Sometimes there’s a focus on the artwork or short featurette. Until further notice, there probably won’t be much to look forward to with this one’s special features. [Actually, the special features have been revealed to be extensive. So shut my mouth.]
Something I forgot to mention with The Avengers, Disney’s digital copy system occasionally irks me. If a movie had a 3D release in theaters (basically every single movie they release now), Disney will only include the digital copy in the 3D combo pack edition and leave the regular Blu-Ray edition as just a Blu-Ray and a DVD. As one of few studios that still supports the iTunes digital copy, being forced to pay more to get it, along with an extra disc for the 3D version you’ll likely never use, feels like a punishment.
MOVIE: +
SPECIAL FEATURES: +
DIGITAL COPY: + & –
Abraham Lincoln: Vampire Hunter 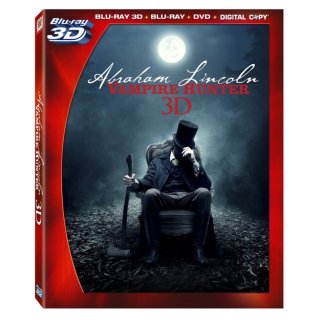 No doubt the title featured here that the fewest people have seen, the reason I included this one is because it has great potential to find new life on video.

Yes, you wondered about it but likely didn’t shell out any money to go see it in theaters. But it’s probably not because you didn’t know what you were getting. There isn’t much ambiguity to a movie like Abraham Lincoln: Vampire Hunter, although it does play things much more seriously than you may expect. Which, I found, made it more hilarious. Truthfully, this movie appeals to a very specific audience that can’t be properly categorized, but those that find they enjoy it will likely help spread the word on it and, with time, may conceivably help it reach cult classic status.

MOVIE: FIND OUT FOR YOURSELF
SPECIAL FEATURES: ?
DIGITAL COPY: +