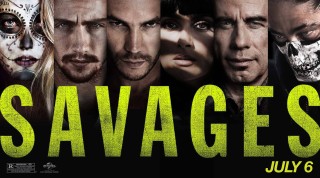 Oliver Stone — he’s a weird guy. Basically insane at one point and possibly still is depending on who you ask. Like his sanity, his batting average as a filmmaker in these last few years has been a little spotty too. If W. and Wall Street 2 weren’t considered successes, Savages may just be seen as a step in the right direction.


Stone has become known for this nutty expressionist style of filmmaking consisting of color saturation and crazy editing (among other things) that he adopted back when he did Natural Born Killers. With a topic as tumultuous and frantic as the war on drugs, splicing in an image of the Buddha now and then doesn’t seem so out there, and such things even bring interest to a lot of parts.


Savages acts primarily as a broad (and gratuitous) statement about the state of the U.S.’s war on drugs. Like it needs to tell you that it’s failed. The film takes a very adamant stance that decriminalizing marijuana would eliminate most the violence and power of the cartels. Make of that what you will, but not in my comments section, because I’m not going near it.

But in focusing on the conditions of this conflict, the movie kind of bypasses telling an involving story. None of the main three characters ever seemed all that interesting. The actors all pulled their weight when they had to but there was never much heft or involvement with them.

Add to that a script that’s incredibly obvious and hokey. Poor Blake Lively had to deliver a narrative that thinks it’s funnier and more ironic than it actually is. If the line “I had orgasms, he had wargasms.” sounds only mildly amusing, don’t worry, it comes off as the most awkward thing ever in the movie. It also seems as if the writers assumed people would forget what movie they are seeing and made sure to put the word “Savages” in the movie no less than five times, with Lively reading the fucking definition at one point. Yeesh.

The ending is likely to leave a lot of people dumbfounded as to why they would even choose to go down the road they do. Without giving too much away, it’s frivolous.

The real reason to see this movie is the veteran actors in the supporting cast. They are the ones who know what they are in for and just how to go about their business. Salma Hayek chews scenery like a boss and the great Benicio del Toro is one of the most enjoyably scumbaggish villains this summer. Even John Travolta is a lot of fun as a morally ambiguous DEA agent. The exuberance from these guys is what grabs hold of your attention, unfortunately at the expense of the main characters story.

Like a lot of movies this summer, it’s refreshing to see Savages embrace its R rating. Basically nothing but sex happens for the first 15 minutes of the movie. After that, the drugs and violence really sets in and there’s a particularly upsetting scene of torture. Not to say that any of these things could be described as soul food, just that so many movies in the summer shy away from gritty graphic content in an attempt to be accessible to as many people as possible, even if it doesn’t gel with the movie.

Inconsistencies and script aside, Savages works in the long run, but only because of the strength of the supporting players and because the topic proves to be so fascinating.