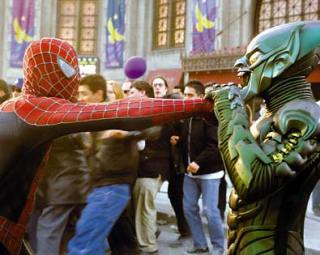 X-Men may have been the first major superhero movie in the Superhero Renaissance we’ve been experiencing for the last decade, but 2002’s Spider-Man was the one to kick it into high gear. In fact we probably owe it thanks for being the reason a majority of superhero movies since have gotten green lit. But that in no way means it’s the standard for all other superhero films to follow.


Part 1 of the original trilogy sees dorky high school student Peter Parker gaining super powers after being bitten by a genetically enhanced spider. After using his abilities to earn a quick buck at Macho Man Randy Savage’s expense, Peter’s uncle Ben is killed by the criminal he let go from an earlier robbery. Learning that great power comes with great responsibility, Peter becomes Spider-Man, and uses his gifts to help others. Suddenly he’s on the radar of his high school crush Mary Jane Watson, who is going out with Peter’s best friend Harry Osborn. Meanwhile, Harry’s dad Norman Osborn is going through a bit of a change himself, using an experimental performance enhancement drug and military tech to become the Green Goblin, leading the two into an inevitable showdown.


I’m aware that I’m the minority on this one, but I really don’t care for this movie. I knew there was a problem when I was a ten year old Spider-Man fan and never had the urge to re-watch this movie time and time again.

I will continue to elaborate on this throughout my further reviews, but most of the problems of the entire trilogy stem from the vision of Sam Raimi and company. They approach the material on all three with this doughy sentimentality that, while certainly appropriate and welcome in some select areas of the universe, becomes so overdone that it reaches the point of almost being a fake, cynical, insincere and misunderstanding ploy to get a reaction. It doesn’t quite reach that crescendo in the first movie but the seeds were definitely planted with this one.


Tobey Maguire is an acceptable Peter Parker/ Spider-Man. He’s got the tongue-tied loverboy angle of Peter Parker in the bag, but it doesn’t feel like a whole lot more of the character is explored (properly). The wisecracks are largely gone, and as a result, so is most of the charisma of the Spider-Man character.


Kirsten Dunst is kind of bland as Mary Jane. Yes, I understand the irony of someone named Mary Jane being relaxed and mellow, but that’s not her character. They play her as the every-woman, and there needed to be more spunk in order to not just look at her as “the girl”.


I still, to this day, absolutely hate how they used the Green Goblin in the movie. That character has so much weight and complexity that to compress him into the second half of the movie is a huge misfire. To start, they flubbed it early in the process with that damn, butt ugly costume. Green Goblin is a character that needs eccentricity but without a costume that allows facial expressions, Willem DaFoe is left to pantomime everything and over-vocalize without any real restraint.  Oh, and did I mention that costume is an eye sore? I’m going to have to go against my better judgement and say that I feel the Green Goblin needs to be revisited in this likely new trilogy, only this time with proper build up and impact.


Speaking of compressing into halves, there is a sizable divide in between the beginning when Parker gets his powers and learns responsibility and the appearance of the Goblin in the second half, so much so that it feels like two different movies have been glued webbed together. Being that both of them are only an hour, neither ends up being very satisfying.

Even by the standards of 2002, Spider-Man has some astonishingly sub-par visual effects. Whenever the scene requires some practical impossibility, mainly many clunky action scenes, everyone becomes a glossy rubber-person and starts flopping about. It happens too many times to ignore.


Another Raimi-ism is the completely cheese-ball moments. Some are simply face-palm worthy (“It’s you who’s out, Gobby. Out of your mind!”) while some are so out of place that they ruin important scenes, such as cutting to a goofy reaction shot right before Goblin gets stabbed to death by his glider. It’s a little too Army of Darkness and not enough… any movie that takes itself seriously. The schlock is just one more thing that is going to come back to haunt them in the future.


One of the aspects that remains untainted by time is J.K. Simmons as J.Jonah Jameson. He nails that character in a way no other cast member (in this movie) does; I honestly have a hard time seeing that part be recast. Likewise, Danny Elfman turns in a score that screams memorable.


Spider-Man is just kind of there. It covers a lot of the “need to know” Spider-Man mythology, but doesn’t spend much time on anything in particular and doesn’t put it together very cohesively. I don’t hate it and it’s certainly not un-watchable but after a while, it just becomes too tedious and disappointing.