Skip to content
HomeCURRENT WEEKEND, PREVIOUS YEAR (MEMORIAL DAY WEEKEND)
Memorial Day weekend is one of the biggest release dates for film, often producing one, if not two, of the top earners of the year on that weekend. The selections are vast, so I’ve chosen one from the past five years, but excluding 2010 and including 2006.

Last Memorial Day played host to what is most likely the biggest experiment in audience obliviousness ever attempted.

The sequel to the highly profitable comedy had the hurdle of making a movie as funny and successful as the original. To which their approach was “Fuck it. Let’s just make the exact same goddamn movie, beat for beat…just with more cock and annoying shit and less funny.”

The original is a “hilarious” comedy in the sense that it made me chuckle a few times and not want to gauge my eyes out. Thus is the state of humor these days. So naturally I found Part 1 to be a bit overrated and my will towards Part 2 was significantly ill. Even the trailer raised a red flag when it followed the exact same beats as the previous one’s trailer.

As it turns out, my reactions watching the movie were remarkably similar to watching Schindler’s List: stone cold somber, deep in reflection on humanity and ending in tears.

Christy Lemire of the Associated Press had it dead on by saying it was either lazy, arrogant or a combination of the two when referring to how it is a carbon copy of the original. How are we expected to laugh when we already know exactly when the jokes come and what they’ll be similar to? The only time I exited Stonehenge mode and a smile clawed through was when Alan had the flashback where they all appeared as kids. Otherwise, pretty worthless.

Ah, but audiences couldn’t resist its allure and helped it break all sorts of records concerning highest grossing R-rated movies (midnight opening, opening weekend, all time R-rated). BAD AUDIENCE!! You should be swatted on the nose with a newspaper or beaten with a stick or something! To be fair, Part 2 was received far less favorably than its predecessor, but its still their fault we’re getting a Hangover Part 3. Audience, go sit in the corner and think about what you’ve done. 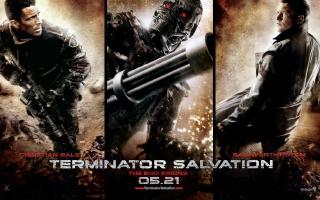 After several years in standby mode, the Terminator franchise finally reappeared in 2009. Fans would naturally cream their pants, right? Well….
Salvation stars Batman and the soon to be Jake Sully/ Perseus and concerns Batman’s battle with the machines and struggling for credibility in a world where the higher-ups don’t yet acknowledge his leg up in this resistance business. Meanwhile, Release the Kraken wakes up in a horrifying future world full of robots after being executed  many years earlier for a murder (in Texas, to no one’s surprise). I wonder what could be happening with him?
I honestly don’t get the big hate-whoop behind the movie. I’m sorry, guy I sat next to in Pop Music, but this isn’t the worst shit ever.

The movie had a lot of resistance before-hand because of the involvement of director McG, and the PG-13 rating (all the previous movies had the ever-popular R). And yes, those are in fact two big detractors for Salvation. McG is not great with actors and there were certain spots where the material would have benefited from darker material. The movie also ruins one of its potentially biggest surprises in the trailers, which ultimately ends up being one of few plot twists.

But I did like how the story differs from all the other Terminator movies. Instead of the time-travel business, this movie stays and focuses on the conflict in the future. And to its credit, Salvation has some really impressive action scenes and despite not being able to show too much graphic content, it still featured an appropriately gritty tone. It’s not up the standard of the other movies (or at least 1 & 2) but it is a solid, stylish summer action flick. That’s all I ever expected it to be.
Audiences apparently came down a bit harder than Warner Bros. would have liked and the movie suffered the ultimate indignity of coming in second place at the box office opening week to Night at the Museum 2. Needless to say, it did not end up being one of the top 5 earners of 2009, as experts had predicted.

Indiana Jones and the Kingdom of the Crystal Skull 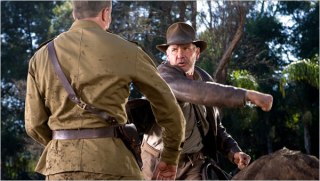 Not even the filmmakers thought the day would come (or hoped), but Memorial Day 2008 saw the return of Indiana Jones, brandishing his trademark fedora, whip, and walker. Wait…
Crystal Skull jumps ahead to the fifties, right in the heart of the nuclear age and the cold war. Indy is drawn into a race to return a mysterious magnetic crystal skull to an ancient civilization and keep the soviets from harnessing it’s power.
This was another one that faced the ever popular “this isn’t what I was entitled to” reaction upon release. And while I didn’t actually dislike it, I ultimately do get the shit-storm that came with it.
Fans waited a long time for this one and in return were rewarded with Shia LaBeouf swinging with monkeys, fridge nuking, and a head scratching plot involving aliens. The brilliant mind of George Lucas strikes again.

The definitive criticism to lob at the movie outside of the tomfoolery is that Crystal Skull is just a stream-lined, watered down version of all the other Indiana Jones movies. It follows the same basic plot structure as the other three, but the violence is largely avoided and the winks and nods to the previous three are omnipresent. But all this pales in comparison to the question “Why should this movie be made?” Outside of the obvious answer, it just seemed ill-conceived  to do another Indiana Jones movie this late in the game.

But since the original Indiana Jones trilogy was great, the watered down version of that, logically, would be good, mostly good or fun, which is still mostly what I thought of it. Besides some hideous CGI saturation in some scenes, the movie had some exciting action set pieces, a few good one-liners, and Steven Spielberg, his composer, and his cinematographer are still in top form.

Most of what I said about Terminator can be translated to this one, as well as the next highlighted movie. I didn’t grow up with either Terminator or Indiana Jones, therefore there was no childhood to rape. All I was looking for was a fun studio action adventure movie and that’s what I got. But if you were expecting something more, hey, more power to you.

Crystal Skull was projected at the beginning of the summer to be the top earning movie of the year. Had more people been enthusiastic about it, it probably would have been. By the end of the year, it sat at third domestically and second globally.

Pirates of the Caribbean: At World’s End 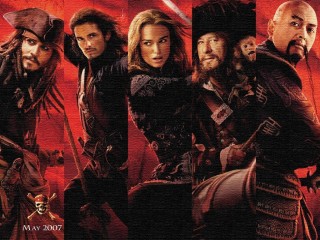 Chalk up another “Memorial Day movie Schuyler likes, but fully acknowledges isn’t that good.” That seems to be the running theme.
2007 saw the “end” of the Pirates of the Caribbean trilogy. Jack Sparrow was swallowed by the Kraken at the end of Dead Man’s Chest and sent to Davy Jones’ locker. With capitalism now controlling the heart of Jones, our heroes must now journey to world’s end to retrieve him for a final battle for the future of piracy. SPOILER: a lot of convoluted shit happens in between.

God this movie is a mess. 20 different plot-lines going on, some of which don’t lead anywhere, and each character looking to double cross someone else or get out of debt. Act two is a test of patience with how long and drawn out it becomes. Usually when a movie starts shooting without a script there’s a deficiency of material instead of a surplus.

Yet, what can I say. The last 45 minutes won me back. There were a few impressive set pieces beforehand, but the maelstrom sequence is still one of those moments that makes me say “This is why I go to movies”. More relieving is that the characters never get lost and all have some nice moments to remind us why we like them. Hans Zimmer also turns in a surprisingly emotional and memorable score. Maybe it was being under the gun or the thought that this would be the last time, but there’s an energy from those involved that was missing from Dead Man’s Chest and most certainly On Stranger Tides. And it does, in fact, make for a satisfying conclusion to a trilogy that shouldn’t have been.

This is where I draw the line. My appreciation of a series can only go so far.

The Last Stand focuses on the development of a cure for mutants and the conflict that it brings. Meanwhile an old ally makes an unexpected return, but is it for the better?

In an effort to raise the stakes for this final chapter, the screenwriters and director Brett “rehearsal is for f@*s” Ratner resort to killing off or curing half the characters. Character removals at the end of a trilogy are fine and usually end up being dramatically powerful, but if they overdo it or just brush over them without a satisfying ending, it becomes the cheapest thing they could possibly do.

And after being teased at the end of X2, the Jean Grey story plays a lackluster second fiddle to the main cure storyline.

Add in the tried and true tradition for third movies of adding too many characters and you’ve got yourself a nice cocktail of disappointment. Nostalgia, for me, is the strongest thing it has going for it.

But the world is crazy, of course, and this is still the highest grossing X-Men film. Sad, considering another entry that will be covered next week.